This is the first thing you should know about an Aries and a Libra, which is probably the same thing that any of your zodiac-obsessed friends will tell you: these two signs are exactly 180 degrees apart. This means that if you look at the Zodiac, meaning the celestial sphere that symbolizes the Sun’s apparent path in the sky over the span of one year, Aries and Libra are exactly at opposite sides.

That in itself is already very symbolic and should give you a general idea of how these two signs work in real life. Itching to find out more? Keep on reading to learn everything you need to know about Aries and Libra compatibility.

Aries and Libra Compatibility In Love And Life 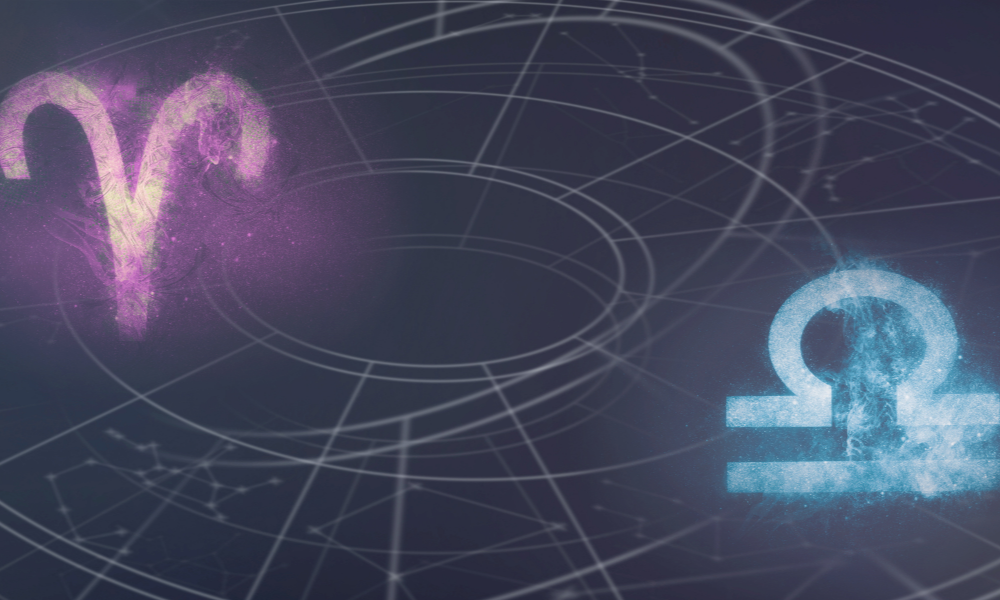 Aries and Libra Compatibility in Love

A lot of TV show couples hook their audiences with characters that could either make it or break it. That is a great representation of the Aries and Libra relationship. Their differences – and there are plenty – could really make or break them.

Before diving into all the potholes that this couple needs to avoid in the road, you must get one thing straight first. Like all signs that lie on polar ends of each other on the Zodiac, Aries and Libra make amazing sexual partners. Like, really amazing.

Their chemistry is palpable the moment they lock eyes. Aries, who is almost always driven by passion, energizes Libra who has no trouble matching Aries’ appetite. Meanwhile, the Venus-ruled Libra can easily teach the self-motivated Aries to be more patient and selfless lovers, which always great for everyone involved.

In terms of the other aspects of a romantic relationship, these two can do pretty good as well. Mars represents passion while Venus represents Love, and it can be said that those two lie on opposite ends of a coin. And so, both Aries and Libra can learn a lot from each other.

The fast-paced fire sign can learn from Libra’s more peaceful, quiet approach, while the Air sign’s indecisiveness can be swayed by Aries’ tendency to just make a choice and do things without thinking it through too much.

Although it’s true that these two balance each other out really well, they also share a lot of fundamental qualities. For instance, both Aries and Libra are curious about the world and everything it houses, which makes them the type to have a lot of passion projects and interests.

They are definitely the kind of couple that would do wood shop one weekend and maybe butchering the next. You simply can’t expect this pairing to ever have a dull day together; in fact, even when they spend a day apart, you can always expect them to come home to lots and lots of interesting stories.

Aries and Libra Compatibility in Life

When an Aries and a Libra first meet, perhaps one of the most common hurdles that would stop these two from being friends is their differing approaches and attitudes towards conflict. Much like a drunk frat boy at a college party, when an Aries gets provoked, there’s really no other way to deescalate the situation other than letting them blow off some steam, whether it’s with their fists or their hurtful words.

This is actually Libra’s worst nightmare. Being above anything else peace-loving, Libra will go to great lengths to ensure that conflicts don’t arise in any situation, which is why they’re often seen as the mediator in friend groups. Bottomline is, you shouldn’t put an Aries and Libra together when there’s conflict, unless you want it all to end in screaming and crying.

When everything is smooth sailing, these two can work well together. They are both cardinal signs, which means that they mark the beginning of their respective seasons and that they are natural initiators and leaders.

They work because Aries leads the action, while Libra manages the more intellectual side of things. Although they might encounter the danger of butting heads, the harmonious Libra does not have a problem with yielding to an Aries, within reason.

The greatest strength of an Aries and Libra relationship is the balance that they bring into each other’s lives. Aries, who is often seen as selfish and impatient, can learn a lot from Libra’s loving and giving nature. Meanwhile, Libra can take notes from Aries’ zest for life and becomes less of an overthinker.